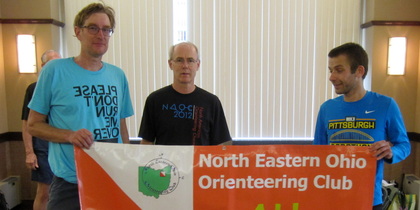 This year’s event drew the highest number of competitive entries in its history.  Despite a couple of misplaced map circles, everyone seemed to have a great time.  Most look VERY tired after three or four hours at 80 degrees.   One competitor even stopped at a few garage sales!  Some mentioned that they enjoyed running though the Irish festival.  Others saw some locations of interest that they didn’t previously know about.  Robert Buraczynski traveled all the way from Delaware to participate.  Six came from Pittsburgh hoping to have a good time without getting too close to Cleveland.  No one achieved a perfect score of 2130 by finding all 68 locations.

map that featured many questions of historical interest.  Many found all twenty locations and nearly walked four miles.

for GREAT PHOTOS taken by Alexis Rzewski as he wandered the course.  Don’t miss these pics!  You may be in one.